QualityCleaningLondon Ltd. provides professional end of tenancy cleaning services in Charlton, SE7. Call us now and book your cleaner at the most affordable price!

Are you looking forward to move out of your current place of residence and move into the new one that offers many more conveniences? You have to plan so many things and run so many errands. Needless to say, every tenant want their security deposit back but in order to get the refund, you have to make the property flawlessly clean. Take advantage of the professional end of tenancy cleaning service we offer to the Charlton residents. The procedure is efficient and hassle free, intended to exceed customers’ demands in every aspect. 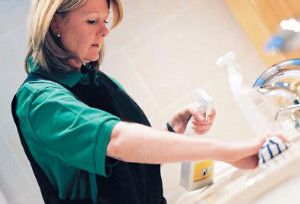 Don’t hesitate to become one of our numerous happy clients. It doesn’t matter if you are a tenant who wants to get a refund of the security deposit or a landlord who wants their property thoroughly sanitised and ready to be rented by another tenant, we can be your reliable assistant. Our end of tenancy cleaning service is suitable for every property. It brings a lot of benefits such as:

We know that moving into a new place can cause financial difficulties because you have to pay a considerable sum of money in advance for rent and deposit. That’s why we are not going to charge you a fortune on the end of tenancy cleaning procedure. We offer the most sensible prices and the most experienced cleaning technicians in the area.

We are convinced that we can deliver an efficient service that would live up to the expectations of every landlord. In case of any objections, we will come back and repeat the procedure free of charge. Don’t miss the chance to have your property thoroughly cleaned and carefully sanitised. Contact us now and arrange a team of friendly and experienced cleaning technicians who will deliver the service at a convenient to you time.

The first written records about Charlton are found in the Domesday book where the district is named Cerletone. The name of the area derives from the Old English words “ceorl” and “tun” and means “farmstead of the freemen or peasants”.
According to the latest data, the total population of Charlton is almost 15,000 people. The district is a multicultural one. Although the greatest percent of the population consists of British people, there are also large Irish and African Communities. Approximately half of the residents are Christians.

The area has excellent transport links and well – developed infrastructure. The thriving economy keeps the percentage of unemployed Charlton residents smaller than average.